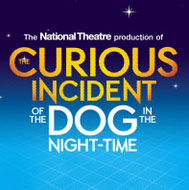 THE CURIOUS INCIDENT OF THE DOG IN THE NIGHT-TIME, winner of five 2015 Tony Awards® including BEST PLAY, is coming to DPAC as part of the SunTrust Broadway at DPAC 2016 / 2017 Season!

Hailed as “One of the most fully immersive works ever to wallop Broadway” by The New York Times, this “dazzling” (Associated Press) adaptation is the Tony Award®-winning new play by Simon Stephens, adapted from Mark Haddon’s best-selling novel and directed by Tony winner Marianne Elliott.

Fifteen-year-old Christopher has an extraordinary brain; he is exceptionally intelligent but ill-equipped to interpret everyday life. When he falls under suspicion for killing his neighbor’s dog, he sets out to identify the true culprit, which leads to an earth-shattering discovery and a journey that will change his life forever.