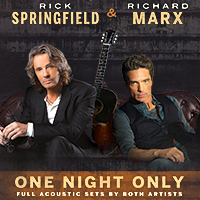 Two incredible stars, 3 decades of hits, one night only. Rick Springfield and Richard Marx join forces to bring their catalogues of hits to DPAC on Friday, January 27, performing full solo acoustic sets by both artists.

Over the past three decades, Rick Springfield has worn many hats as an entertainer and performer. The creator of some of the finest power-pop of the ’80s, a Grammy winning singer, songwriter, and musician who has sold 25 million albums and scored 17 U.S. Top 40 hits, including “Jessie’s Girl,” “Don’t Talk to Strangers,” “An Affair of the Heart,” “I’ve Done Everything for You,” “Love Somebody,” and “Human Touch.” He’s an accomplished actor who most recently starred opposite Meryl Streep in the feature film Ricki and the Flash, gave a chameleonic performance as the creepy Dr. Pitlor in HBO’s prestige drama True Detective and is earning great reviews for his portrayal of Lucifer this season on the CW hit, Supernatural. In 2014, Springfield was honored with a star on the Hollywood Walk of Fame, located around the corner from the first apartment he lived in when he first arrived in the U.S. from Australia in 1971.

As a performer, Grammy winning singer, songwriter and producer, Richard Marx’s nearly three-decade-long career has had numerous highlights. The Chicago native has sold more than 30 million albums worldwide, including chart-topping hits “Hold On To the Nights”, “Don’t Mean Nothing”, “Satisfied”, “Right Here Waiting”, “Keep Coming Back”, “Hazard” and #1 AC hit “Now And Forever”. When both Rush Street and Paid Vacation albums went platinum, Marx achieved a seven-year string of triumphs that rivaled any in pop-rock music history. To this day, he is the only male artist to have his first seven singles reach the Top 5 on the Billboard charts.