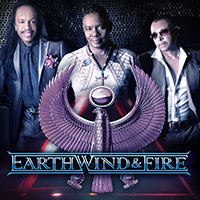 America’s seventh top-selling musical group of all-time Earth, Wind & Fire is coming to DPAC on April 1, 2017.  Their music unites genres of funk, R&B, synthesized soul, and gospel and their message of love brings together fans of every generation.  Don’t miss the opportunity to see them when they return to DPAC.   This will mark the second appearance; their first was a sell out in 2011.

Earth, Wind & Fire was born in Chicago in 1969. With a signature sound beyond categories and a groove as deep as the soul of the planet, the band’s legendary journey has set the standard for music of all genres.

One of the most important, innovative, and commercially invincible contemporary forces of the 20th century, Earth, Wind & Fire has released a total of 23 albums. They have recorded eight #1 R&B singles and eight Double Platinum Top 10 Pop Albums. EWF has earned more than 50 Gold and Platinum albums and sold over 90 million albums worldwide, earning them a solid spot on the list of all-time best selling music artists.

Earth, Wind & Fire’s career achievements and their music influences impacted music history. They have been inducted into Rock and Roll Hall of Fame (2000) and The National Academy of Recording Arts & Science (NARAS) bestowed its highest honor, the Grammy® Lifetime Achievement Award in 2016, totaling nine Grammy® Awards for the group. The ensemble has also earned Lifetime Achievement honors from ASCAP, NAACP, and the BET Awards.

Many contemporary artists and superstars–including Usher, Beyoncé and Prince —are self-proclaimed Earth, Wind & Fire fans. Alicia Keys has said that EWF ” the best band ever” while Mary J. Blige showed her love for the band in her own version of the band’s hit “Imagination.” ́ The Black Eyed Peas took the stage with EWF with a performance at the XXIX Super Bowl, and again when opening the 57th Annual Primetime Emmy Awards.

The worldwide EWF fanbase also extends to include heads-of-state. President Bill Clinton invited the group to the White House in 2000 as special guests at a State dinner and, in February 2009, President Barack Obama invited Earth, Wind & Fire to perform in the East Room at the White House for the first social event of the new administration, declaring in an interview with Rolling Stone that EWF were “rhythm and blues and pop staples for me.”

In April of 2014, lead singer Philip Bailey released his memoir SHINING STAR: Braving the Elements of Earth, Wind & Fire. Shining Star is a story of triumph and challenges —chronicling the band’s iconic rise to the top.