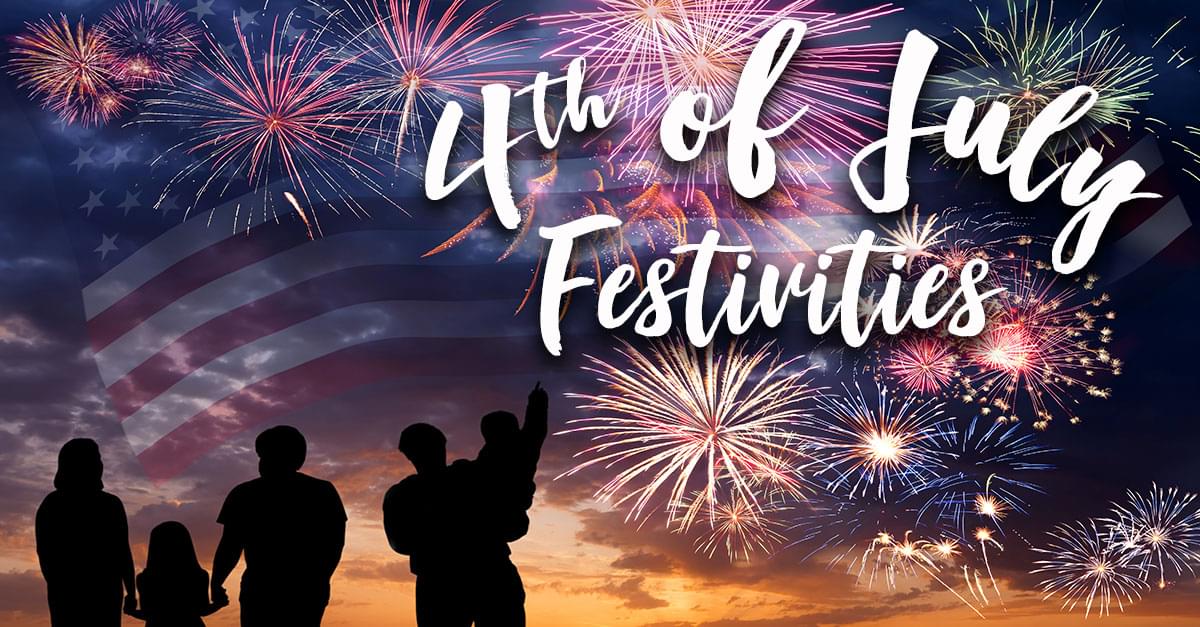 Here’s what’s happening around the Triangle and Triad to celebrate Independence Day!

Watch fireworks soar over the lake, after an evening of live music, food, vendors and more. You’re encouraged to bring a lawn chair or blanket. Admission: free; $6 parking fee.

The festival, now in its 43rd year, begins with a block party Friday evening, featuring live music, food, drinks and “dancing in the street.” Saturday is an all-day celebration, beginning with a parade and street festival, followed by a pops concert in the evening and a fireworks finale. Admission: Friday, $5; Saturday, free.

Celebrate Independence Day early by attending the Fuquay-Varina Independence Day Celebration on July 3rd. This event includes a diverse group of food vendors, music acts, free inflatable rides and a free world-class fireworks display. Gates open at 6pm. A concert featuring Spare Change begins at 7pm. Make sure to bring a blanket or chair and get there early to claim the best location to view the fireworks. Admission: Free

You don’t have to wait until July 4th for fireworks in Morrisville! Kick off your Independence Day celebration with a fireworks display in Morrisville Community Park. Bring your blankets, chairs and snacks to enjoy the spectacular show, but please no glass containers or alcohol. Admission: Free

Join us for an evening of fun for the whole family featuring music from Bull City Syndicate and a headlining performance by the North Carolina Symphony. Your children will love our Kids Adventure Zone featuring inflatables, games and crafts. Bring a picnic, or help your community by enjoying delicious concessions provided by local non-profit organizations. Join us at the Garner, Parks, Recreation and Cultural Resources tent for some fun activities to kick off National Park and Recreation Month! Top your evening off with the best fireworks show in the Triangle and you’ll see why the National Civic League named Garner an All-America City in 2013 and why our citizens are proud of their hometown. Admission: Free

The Band of Oz, one of the southeast’s most popular beach music bands and a 1997 Beach Music Hall of Fame inductee, returns to Wake Forest to headline this year’s celebration. The band will take the stage at 6:30pm. Admission is $5 per person. Children ages six and under are admitted free. Concessions, including hamburgers, hot dogs, popcorn and snow cones will be available at the Fireworks Spectacular, but cash is the only form of payment that will be accepted. Three food trucks will also be on site during this year’s Fireworks Spectacular, including Lumpy’s Ice Cream, Charlie’s Kabobs and Fuzzy’s Empanadas. Picnic baskets and/or coolers are allowed but will be inspected by the Wake Forest Police Department before being permitted inside the stadium. Admission: $5, 6 and under are free

Celebrate Independence Day with the Mudcats, and you’ll enjoy “the best fireworks show in Eastern N.C.” Admission: Free for ticketholders

The biggest and best Independence Day party Cary has ever thrown. Beginning at 3pm, you’ll be able to enjoy family-friendly activities, including rides and games, a venue-wide scavenger hunt, watermelon-eating contests and even a 50-foot Ferris wheel! The Cary Town Band kicks off music at 5:45pm, followed by the North Carolina Symphony and fireworks to cap the evening. Admission: Free

The festival, now in its 43rd year, begins with a block party Friday evening, featuring live music, food, drinks and “dancing in the street.” Saturday is an all-day celebration, beginning with a parade and street festival, followed by a pops concert in the evening and a fireworks finale. Admission: Friday, $5; Saturday, Free.

Celebrate the Fourth with food and fun, live bands will perform throughout the day, and the night concludes with fireworks. Admission: Free

Ranked by Travel + Leisure as one of America’s Top Ten Best Towns for a July Fourth Celebration, Chapel Hill carries on the tradition year after year. Locals and visitors will enjoy live music, games, face-painting, food, a watermelon-eating contest, fireworks and more. Admission: $1

Once again, downtown Raleigh will host the city’s Fourth of July fireworks extravaganza. Join in on the Independence Day Celebration during the day with live music, beer/wine tent, kids rides and games, Circus Maximus, street performers, eating contests, food and art vendors, picnic on Fayetteville St. and much more! Fireworks will light up the sky over the Duke Energy Center for the Performing Arts starting at around 9:30pm. Admission: Free

Celebrate Independence Day with the Mudcats, and you’ll enjoy “the best fireworks show in Eastern N.C.”
Admission: free for ticketholders

The Third Annual July 4th Celebration will be held on Monday, July 4th. The festival will run from 5pm until Fireworks (approximately 9:15pm) at Knightdale Station Park. Food trucks, vendors and kids activities will be featured, along with a performance by The Embers. The festival is free to attend. Shuttles will be available and will start running at 4pm.
Admission: Free

The Joel Lane Museum House, “The Birthplace of Raleigh,” will sponsor its 25th annual Independence Day Open House on Mon., July 4, 2016 from 11am-4pm. Admission is free, and donations are requested. Colonel Lane was a founding father of NC’s capital city and an officer in the Wake County militia during the American Revolutionary War. The house will be open and staffed by costumed docents who will be available to answer questions. On the grounds, living historians will demonstrate various aspects of colonial life, and visitors will be able to participate in hands-on activities such as writing with a quill pen or making rag dolls. There will be old-fashioned crafts and games for the children and free lemonade for all. The garden in its full summer glory will be on view, and herbs and trees from the gardens will be for sale. In addition to outdoor activities, the 1769 plantation manor house, the circa 1790 “kitchen” building and the Visitors Center and Museum Store will be open.
Admission: Free, donations accepted

The city’s annual July Fourth fireworks will be held around the Stadium and Arena Complex (Carter-Finley Stadium and PNC Arena area). Free parking to view the fireworks will be available within PNC Arena lots, Carter-Finley Stadium lots and North Carolina State Fairgrounds Bunn Field lots along Trinity Rd. Fireworks will be launched from the Varsity Lot at North Carolina State University. Gates open at 6pm, and fireworks launch around 9:30pm. Perfect for family and friends, this breathtaking show is a must-see.
Admission: Free

Join Historic Downtown Apex as they celebrate America’s Birthday! Kids 12 and under may participate in Uncle Sam’s Parade of Wheels down Salem Street. Decorate your bike, wagon, tricycle, or other non-motorized vehicle in patriotic colors to celebrate our nation’s independence. The Parade starts at the corner of Salem and Chatham Streets at noon, so be sure to line up early to save your place. Festivities will end with the Apex Fire Department’s Splash Down! Please note: helmets are required for the Parade of Wheels. Admission: Free

Come out the day after Independence Day for this traditional celebration of America’s birthday. Admission is free and everyone is invited, including friendly, leashed pets! The fireworks display is scheduled to begin at 9:15pm, weather permitting, and last about 20 minutes. Festivities include face painting, fireworks, food vendors, inflatables and games, kids crafts, live music, playdough, potato sack races and more! Admission: Free

This annual street festival will feature arts and crafts vendors, food, live music, amusement rides for kids, and will culminate with a fireworks display. Admission: Free