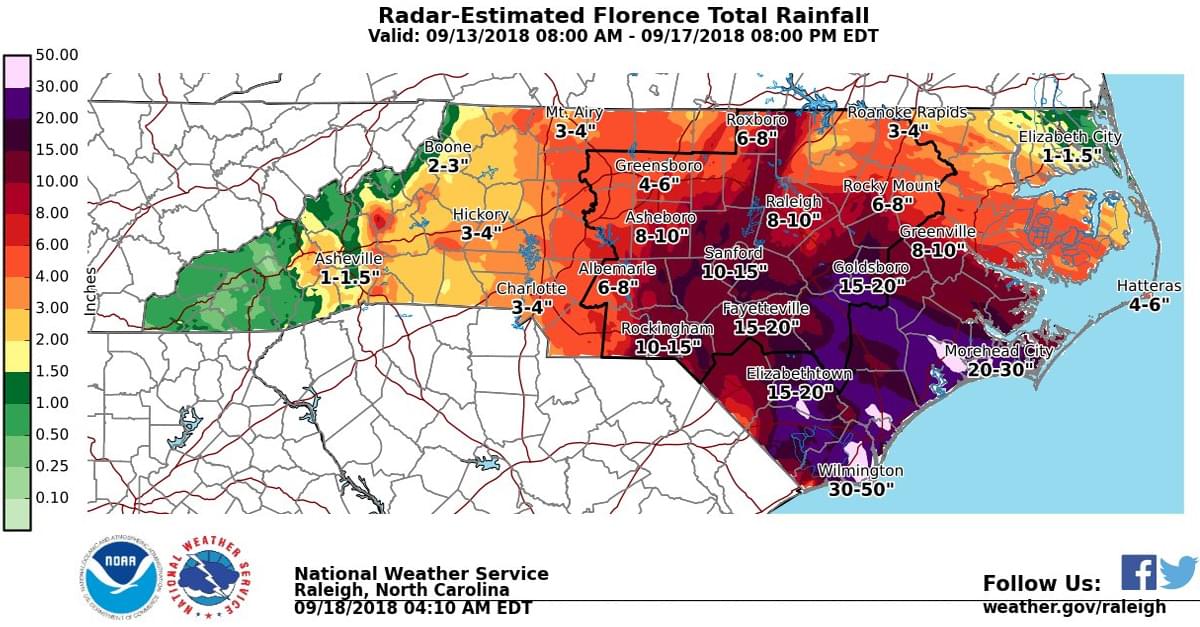 According to the National Weather Service, Hurricane Florence dropped 8.04 TRILLION Gallons of rain on NC.

Here’s the unofficial, radar-estimated storm total rainfall from #Florence over all NC (actual gauge-measured amounts not included). Using the average rainfall over the state, Florence dropped about 8.04 TRILLION gallons of rain on NC. #ncwx pic.twitter.com/Y7nKsAoqMp

The number was estimated using the average rainfall over the state and not actual gauge-measured amounts – those will be included in the coming days.

Flooding continues to be a problem across the state, and waters continue to rise. The Cape Fear River in Fayetteville is expected to crest at 61.6 feet.

You can clearly see the water levels rising in Cape Fear River as we compare photos from Sunday to Today. #capefear #Florence #ReadyNC #ReadyFay pic.twitter.com/jiPUCVpLBP

115 pm.. The Cape Fear at #Fayetteville is in major flood and has reached 60.1 feet. It will continue to rise and will crest at 61.6 feet just after midnight. Numerous structures and roadways are flooded. Follow all local evacuation orders. Updates: https://t.co/5HTtV6NGi2 pic.twitter.com/we7KAp7OYL

As of Tuesday afternoon, the DOT estimates 1,000 road closures and Wilmington remains inaccessible by land.