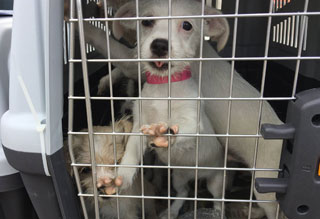 The Humane Society of the United States (HSUS) and the SPCA of Wake County have partnered to bring more than 100 homeless pets from Puerto Rico to North Carolina for adoption.

The Humane Society of Charlotte, Pawfect Match Rescue, Saving Grace and Safe Haven for Cats will also be receiving animals.

Hurricane Maria devastated Puerto Rico and many families have been left homeless and separated from their pets. In an effort to help reunite families with their pets, the HSUS is transporting animals who were already up for adoption before the storm hit from shelters in Puerto Rico to shelters across the United States. This work is making room for Hurricane Maria’s canine and feline victims in an effort to reunite them with their families. “Our number-one priority is keeping pets with their owners and returning them,” explains Kim Alboum with the Humane Society of the United States.

“These families are hurting and in need,” added President and CEO of the SPCA of Wake County Kim Janzen. “By opening our doors here at the SPCA, we can take some of the strain off the already-stretched-thin resources in Puerto Rico.”

The HSUS has secured health certificates for the animals showing that a veterinarian has evaluated each animal and cleared them for travel.

The trip is generously funded by Humane Society of the United States and the plane transporting the dogs will be flown by Wings of Rescue.

The animals will arrive at RDU airport at 6pm on October 5th.