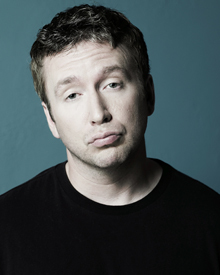 Frankie and Chad talk about what they hate most about driving, how Paris Hilton is too young for him, his kids and his pet peeves.

Though he often flies under the radar, Chad Daniels has carved out a rather nice niche for himself with his acerbic yet sweet take on comedy. Over the years he has racked up several appearances at the Just for Laughs Festival in Montreal in addition to a slew of visits on the late night circuit (Late Late Show, The Tonight Show, Conan). Daniels has also recorded three CDs along with a half-hour “Comedy Central Presents…” special and his most recent one-hour special, “As Is”.

Catch Chad Daniles at Goodnights Comedy Club on March 31, 2017 and April 1, 2017. Get your tickets at goodnightscomedy.com.