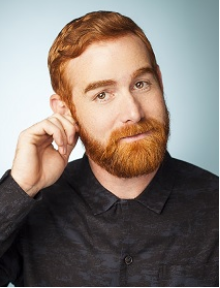 Comedian, actor, and writer Andrew Santino is well on his way to becoming a household name. Santino just finished shooting the upcoming film “The Disaster Artist” with director and star James Franco, and can soon be seen in the new Showtime series “I’m Dying Up Here.” Santino’s long list of credits also include a Comedy Central “Half Hour” special, and appearances on “Conan,” and “@Midnight.” His first Showtime special is slated to premier in 2017.

If you missed it, Frankie and Andrew talk about Zaxby’s, his shows on Showtime, if he’s team Beyonce or team Jay Z and listen to the strange rap song they make together.